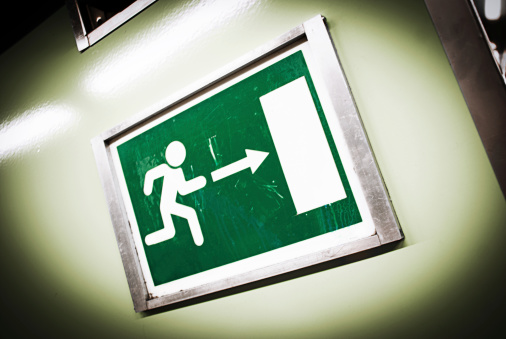 There we sat, at 5:15 a.m., Gate A22 at Lambert St. Louis International, waiting for the first flight of the day to Baltimore.

Everyone there was moving slooooowwwwwly, a little bleary-eyed and sluggish, and with good reason: If you’re at the gate at 5:15, you were probably awake at 4. Maybe earlier.

Still, when the alarms started whoop-whoop-whooping and the PA told us to evacuate the terminal, you would have thought even the weariest of travelers would have gotten their asses in gear in and sprinted for the exits.

You would have been wrong.

Almost in unison, everyone looked up from their books, newspapers, bagels, iPhones, whatever, and did … nothing. Nobody moved. Nobody showed any sense of urgency whatsoever. The general consensus seemed to be, “Maybe if we ignore it, it’ll go away.”

Luckily for them, it did. It was a false alarm, and all was back to normal in 15 or 20 minutes.

Social business, the cloud, Big Data, mobile technologies, virtual work, the so-called “giving economy” — these alarms have been going off for years now, urging — in fact, begging — us to take action. And what have most CPAs been doing? Standing around, looking nervously from side to side, waiting for someone else to make the first move, hoping it’ll all go away, while the walls burn and crumble around them.

Our stale, moldy, outdated business models are collapsing. Grab your stuff and sprint to the emergency exits.

It’s a scary thing, leaving all of that comfort and security behind.

But when the alternative is extinction, what choice do you have?