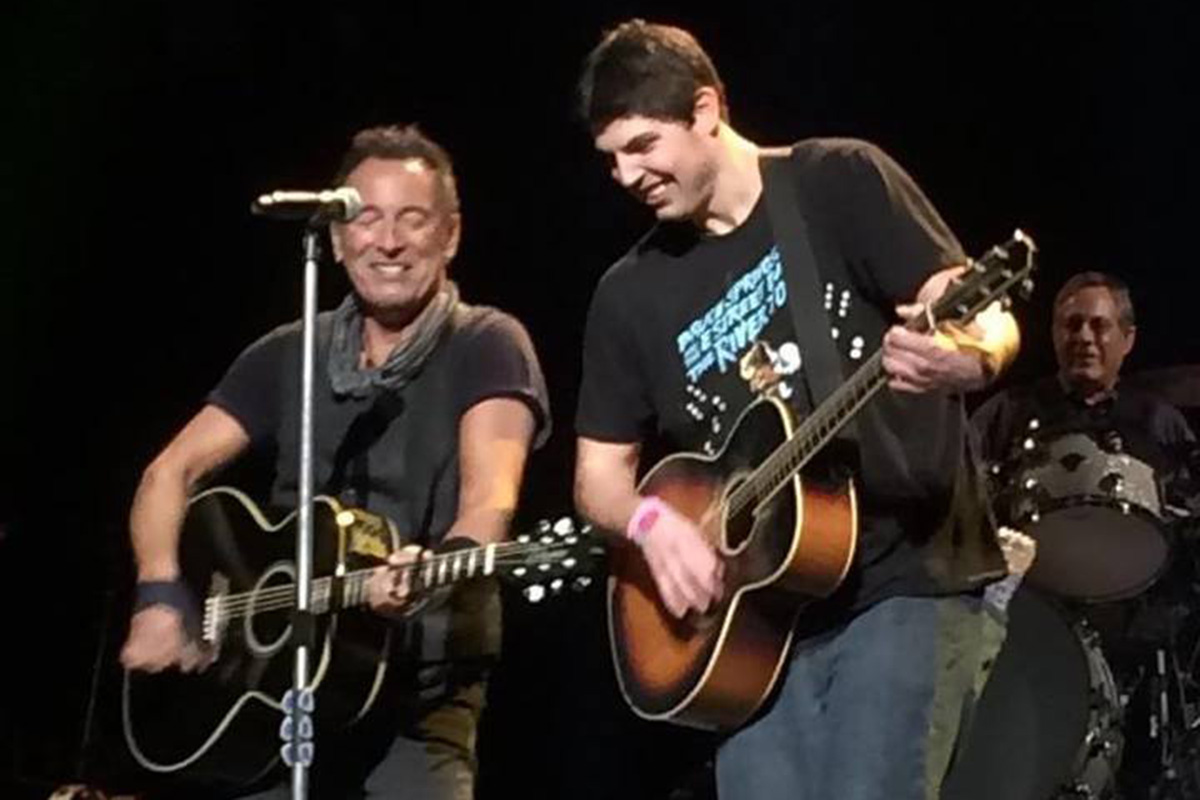 Tom England built his door, then he knocked the damned thing down.

The 22-year-old St. Louis native and La Salle University senior turned out at Chaifetz Arena on March 6 to see Bruce Springsteen and the E Street Band power through their usual three-and-a-half-hour marathon show. But England planned on doing more than just watch.

He found his way to the front of the stage with a homemade sign that read, “Can I work on the highway with the E Street Band?” It was a reference to Springsteen’s 1984 song “Working on the Highway,” and England’s intent was clear: He wanted to play that song. On stage. With The Boss.

Near the end of the show, Springsteen spotted the sign. Amused, he dared England to join him on stage with the most ominous invitation ever: “I hope you know what you’re doing.”

Simply put, the kid nailed it. He borrowed one of the band’s acoustic guitars and stole the show, at first hanging out with the rest of the band while Springsteen kicked off the song, then finding the courage to join Springsteen at center stage and bring the thing home with some moves The Boss himself would have been proud of.

It was one of the gutsiest moves I’ve ever seen. In front of more than 10,000 crazed Springsteen fans, this kid had the balls to ask one of rock’s biggest legends for a favor. Then he sold it and brought the house down.

In his book Originals, Adam Grant explores what makes risk-takers like England different than the rest of us. It starts with a willingness to “reject the default.” In this case, the default is to come to a concert, enjoy it, then go home. Don’t rock the boat — just do what the other 10,000 people in the building are doing.

“When we become curious about the dissatisfying defaults in our world, we begin to recognize that most of them have social origins: Rules and systems were created by people,” Grant writes. “That awareness gives us the courage to contemplate how we can change them.”

Most of us Springsteen fans dream of playing “Working on the Highway” with Bruce on stage. We might even act it out when we’re home alone … not that I have any personal experience in this area.

But that’s as far as it goes. It’s a dream. Nothing more.

Here’s what separates us dreamers from the doers like England:

“They feel the same fear, the same doubt, as the rest of us,” Grant writes. “What sets them apart is that they take action anyway. They know in their hearts that failing would yield less regret than failing to try.”

Tom England didn’t fail to try. As a result, among us living-room rock stars, he’s a legend.

What have you done lately?